So, here is a work by the Russian painter Ivan Kramskoi. The woman he depicts against a St. Petersburg palace has sensuous lips, hazy eyes, thick curved eyebrows.  If you look closely she also has skin imperfections, freckles, maybe a pimple on her nose.  She's not so much beautiful as impressive and 'chic,' dressed in the latest fashion of the time.  Demi-monde fashion to be exact.  Not without reason critics at the time called her "the courtesan in a carriage," and "an offspring of big cities." And these assessments must have pleased Kramskoi because it was his full intention to bring a real life prostitute, as she really looked, onto the canvas.
Does she in any way remind you of this woman, another, ah hem, odalisque?
The artist here has made his courtesan or prostitute acceptable by portraying her as an exotic from the Far East.  He has also turned her into a statue of sorts with flawlessly unrealistic skin, and a body that is too long and lacks all signs of joints. Essentially, he has purified her and brought her out of private male salons into the public.
The 'he' in this case is Dominque Ingres, a French neo-classical painter who was so influential in Paris, Rome and later Russia, that he could do whatever he wanted. The St.Petersburg Academy of Arts embraced him whole-heartedly sending some of its most notable painters abroad to France and Italy to learn his "statuesque" style.  Those who didn't go abroad were taught their art by studying and copying the Academy's sizeable collection of neo-classical artworks.
This until Kramskoi and some of his young fellow students challenged the Academy, asserting their freedom to paint realistically.  Unable to effect Academic changes and led by Kramskoi, they publically  broke with (and/or were expelled from) the Academy and began their own movement which became known as peredvizhniki or itinerants. Classically trained but now dedicated to portraying real life and bringing art to the people, they organized their own exhibitions, traveling from town to town across Russia.
In the process, men went from looking like this: 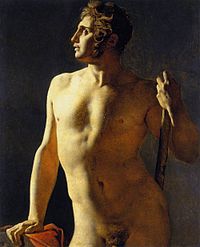 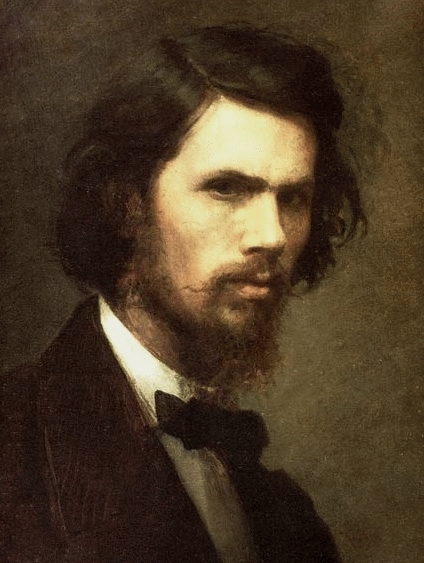 Gradually Kramskoi's aspirations to portray the true expressiveness and real circumstances his images took hold with folowing generations of Russian artists. By the end of the 1800's portrait subjects were being painted with personalities and complex human emotions, and our 'unknown woman' and her ilk were out of their carriages and seen on the walls of Russian galleries, museums, dachas and some of those St. Petersburg palaces.