People see different things in Wayne Thiebaud's art.  He's been called a Pop Artist, a Classicist, a Bay Area Figurative painter, an Abstract Artist and more.  In this latest exhibition, Memory Mountains at Paul Thiebaud Gallery, (which it really is since, of the 40+ works on display, only about five are available for purchase), reviewers have seen vestiges of William Butler Yeats' constant revisionism and Angkor Wat. One reviewer somehow saw a very strong reference to Rembrandt's Flayed Ox 1655.  To wit:
(Rembrandt, Flayed Ox, 1655)
and  (Thiebaud, Big Rock Mountain, 2004-12).

They could be right.  Wayne Thiebaud does not talk about the emotional content of his work, never has.

to me Thiebaud is conveying the complex, ultimately unfathomable 'mountainousness' of mountains. Like Thiebaud, I have lived near mountains, the highest of which was in Idaho. There is an omnipresent, prehistoric, hulking 'thereness' to them, quietly, densely, mysteriously playing out their geologic drama. A constant reminder of two scales - geologic and human - somehow involved in a single story.

I see Thiebaud acknowledging the primacy of mountains in this compelling story, deferring utterly to their awe.  He makes visual millenniums of geological phenomena that have and continue to form mountains.  The eras of tectonic plates, the minerals they were ground into, the make up and dense dimension of the rocks beneath surface topography.  And he paints them in so many densely packed colors that they clash, vibrate and come alive, capturing the constant and diverse geomorphology. 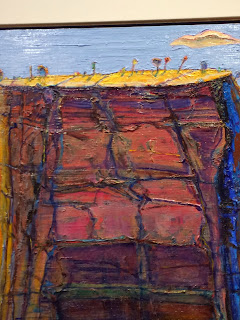 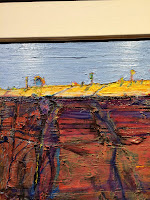 He shows us what it looks like to live in the presence of mountains: 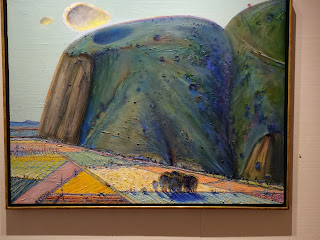 And, in so doing, he grapples with/meditates on/displays the thinness, precariousness, dangerous unpredictablility of the thin topsoil humans occupy. 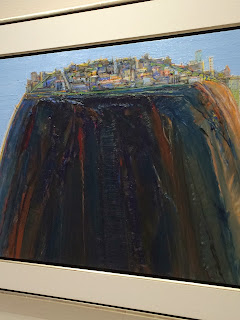 But he also shows the beauty of the manmade crust.  It is there in geologic scale in the paintings: tiny but very colorful, assembled, manicured, pretty, desirable, luscious: 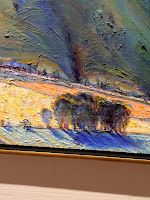 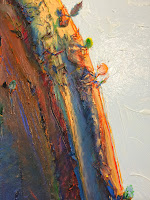 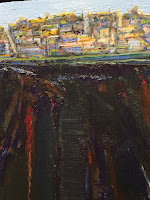 And in seeing this, my entire sense of what Thiebaud has been painting all these years changed utterly.  The crust, the human crust we live in and on is just as alluring as all those thickly frosted cakes, gooey pies, glossy lipsticks, eclairs, gumballs, milkshakes, high heeled shoes, bowled cherries, bathing beauties, parfaits, hot dogs, suckers (yeh!)  - his lush stand ins for the Deliciousness of Life in America.  Beguiling, hard to turn away from, very hard to leave.

But, Thiebaud grew up next to mountains and they've been quietly reminding him ever since that the crossing of human with geologic time and life is exceedingly  brief.  All these human beguilements, this lush and compelling life, rests temporarily on a shifting, cracking, shaking, stretching, shell as precipitously ever-changing as the precarious streets of San Francisco. 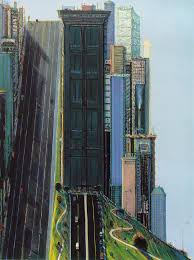 This I had not seen in Thiebaud's work before.  When I left the show the mountains stayed with me in all their inexorable evolving and dissolving until I believe, yes, this is what I saw, this is the complex terrain Thiebaud took Ciwt into.

http://www.paulthiebaudgallery.com/shows/thiebaud_show_paintings_13.html
Posted by Ciwt at 3:29 PM No comments: