Our smoky San Francisco skies these days put me in mind of Jackson Pollock's drip paintings. The one above is actually a bit unusual because he signed it upper left as a vertical and it is more 'conveniently' sized than his enormous, wall sized canvases.  But, in May 2013, those things didn't stop someone from buying Number 19 for $58,363,750 at a Christie's auction.

Pollock was famous in his lifetime especially during his legendary burst of creativity from 1947 - 1951 when he had several gallery shows and countless magazine articles written about him.  Fame though  did not equate with agreement among critics and the general public about the quality of his art. Time dubbed  him "Jack the Dripper" while the preeminent critic of the era, Clement Greenberg, championed Pollock so actively he actually organized his first gallery show (which of course got rave reviews).  The wide variety in people's opinions about his art continues to this day and I'm guessing you already have your own, if you've thought of Pollock at all.
Far be it from me to try to change those. But, if you were here, I'm betting we'd agree Pollock's Number 19 is a pretty good likeness of the West Coast sky these days
Posted by Ciwt at 4:30 PM No comments:

One can't talk about Monet without talking about his 250 Water Lily paintings which depicted the flowers and surroundings of his home in Giverny.  These paintings and the gardens themselves were the primary focus of the last 30 years of his life.  He loved them both, and once said, "Aside from painting and gardening, I am good for nothing."  He also felt he was a better gardener than he was a painter - which is saying a lot!

It is lucky Monet found painting (and selling) the lilies "an extension of my life" because they were also a huge extension of his budget.  He employed six full time gardeners, one of whose daily assignment was to dust and de-pollenate the pads and water so that the colorful light they reflected was pure.  And he actually had a branch of the Epte river diverted to his property to fill his lily pond.  This was much to the objections of his neighbors who were almost successful in preventing one of the most beautiful gardens and series of paintings ever created.

The paintings were  beautiful, life like, refined, sparklng, serene:

Until they became fragmented, garishly colored and, in my estimation  just kind of weren't.

The reason for the change was cataracts.  Monet began having visual problems as a result of them around 1912 and his palette became gloomier, murkier and less refined.

I consider Monet's last years sad because I feels he was.  Sad, lonely without his wife and son, depressed, in pain,  possibly a bit demented and, in spite of a long overdue operation, losing the greated gift he was graced with: his special eye sight.   But there are others who don't see it this way at all. Many of them love the later water lily paintings and some see them as early abstract art.  Oh well, such are the different viewpoints of the art world.

I would like to paint the way a bird sings.
Claude Monet

Monet wasn't primarily interested in painting the beauty of nature; he wasn't after a beautiful painting.  He was after nature itself, capturing it.   He didn't see a sea or a cliff or even a water lily.  He saw countless shades of nature's myriad colors; a pink here, a deeper pink there, bright yellow, lilac, the glints of light and color that made up the whole.


And it wasn't easy to see this way, to have this drive.  As he said, "Color is my daylong obsession, my joy, my torment."  In search of it he flirted with illness or even death standing in icy sea blasts of sea winds or snowstorms working as one of the first painters to ply his talents 'en plein air,' ie, outside - often all day.

The obsession was there from the beginning and manifested most dramatically in his series paintings.  This practice of painting the same subject at different times of day began in earnest in the 1880's and continued until the end of his life in 1926.  His  most well known series included Mornings on the Seine, Houses of Parliament, Rouen Cathedral. 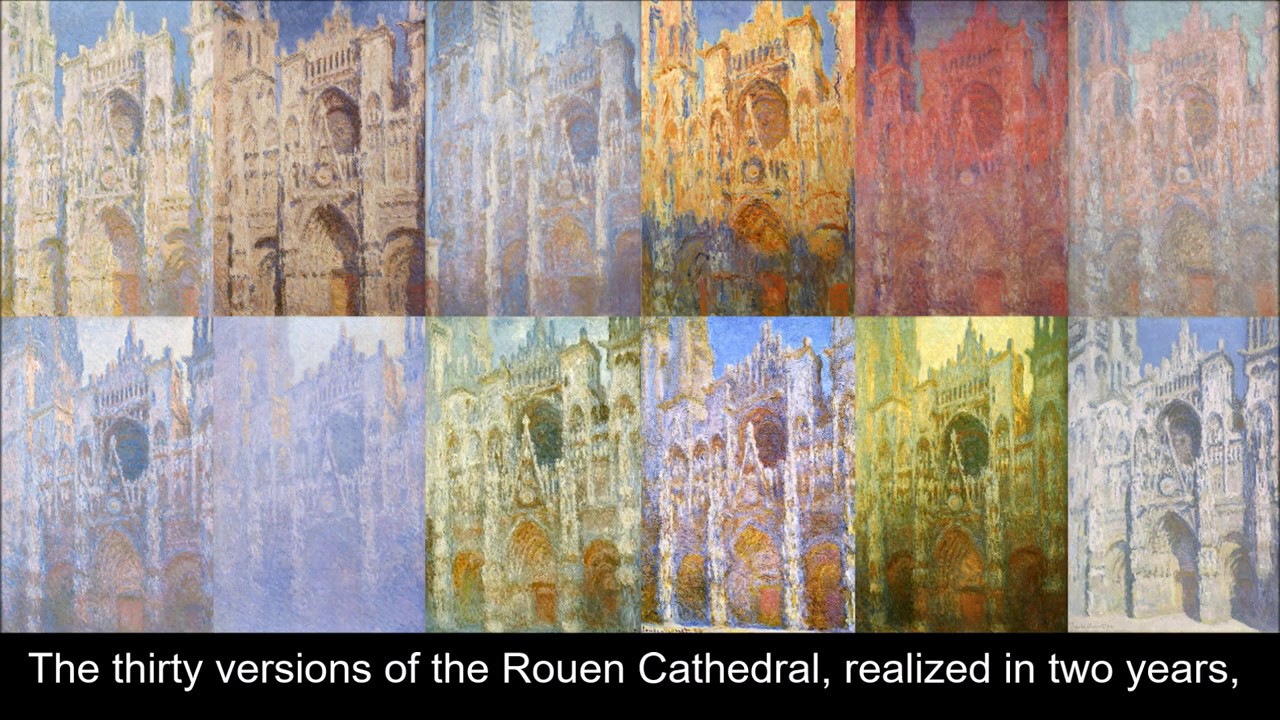 But probably the most significant series for him at the time was his 25 painting Haystack series from 1990-1991.  Fifteen of them were the first to be exhibited as a series.  They were recognized as a breakthrough in French art but, most importantly for Monet, they were immediately popular.  All the paintings in the show sold within days,  and this set him free - at last! - financially.  His reputation and prices rose steeply and he was able to buy outright the house and grounds at Giverny and start constructing a water lily pond.  (NB: He was finally past subsistence living, but never a man to deny himself, he contiued to live at an economic edge.  Another story).

No matter what his subject, Monet's underlying fascination in all his series was light, its intransience.  He needed at the deepest level to capture that.  Even knowing his quest was ultimately impossible, he would rise around 3:30 in the morning so as to see the first light, set up multiple canvases, then paint and move rapidly from one to another as the momentary light changed.  This process was repeated day after day whatever the weather, sometimes for weeks or months until he deemed each canvas as complete as possible.  As he said, "I'm never finished with my paintings; the further I get, the more I seek the impossible and the more powerless I feel."

Monet's series culminated of course in his great and most famous Water Lilies paintings.  More on these in a moment.


Before Monet became Claude Monet, the Father of Impressionism, around the age of 32, he spent much of his time called by his given name "Oscar," rebellious, impoverished and painting some of my favorites of all his paintings.  Like:

There are many more favorites from Monet's early years, perhaps more of them than his  later Impressionist paintings so adored by the public.  Perhaps...