Ciwt has not personally seen this famous painting by the equally famous Spanish artist, Goya, nor was she aware until recently of the historical circumstances it depicts*.  But The Third of May** (it goes by several titles) transcends its circumstances and is extremely moving even in pictures.  She can only imagine how she would feel if she stood face to face in its nearly 8.5' by 11.5' presence.

(Probably like she felt after writing her Sr. thesis on Picasso's Guernica (1937)from hundreds of images in art history books.  She had 'seen' and written about nearly every inch of the canvas and thought she 'knew' it until she encountered it in all its emotional enormity and outrage at MoMA.  She'd forgotten it was there, and nearly lost her breath when she looked up at its prominent position immediately upon entering MoMA)***

Guernica is absolutely related to The Third of May, 1808 - as an impassioned statement by a great Spanish artist about the abject bestial cruelty of war.  A Modern statement.  Like Guernica, The Third of May is acclaimed as one of the great paintings of all time.  But it stands alone as what many art experts have deemed the first modern painting.

The Third of May toppled many traditional art pillars.  One wonders if Guernica could have been received without The Third of May already being in the world. Goya's painting was not welcomed - might have even been hidden by the King of Spain rather than display a painting that fearlessly depicted the brutality and human suffering of war.  Up until this painting, it was traditional in Spanish painting to depict war as a bloodless affair with little emotional impact.  But here was a painting that, not only displayed blood but dared to mix Christian iconography with 'mere mortals' - common laborers at that.  (The lantern that is the sole source of light in the painting was traditionally associated with Jesus and the removed powers of the Church, and certainly the main figure is a crucifixion symbol - even including a nail hole in his right hand ).

Just contemplating this groundbreaking artwork is a lot for Ciwt. So, more soon The Third of May, 1808  and the complex artist who painted it.

*Napoleon had tricked his way into Spain on the pretense of passing throug hin order to engage Portugal.  When he got his French troops across the border, he executed his original plan of occupying Spain and installing his older brother, Joseph, as King of Spain.  On May 2, 21.000 Spaniardsr ose up against the French military, but faced brutal and merciless retaliation the next day.  Goya painted both events within a six month period in 1814. 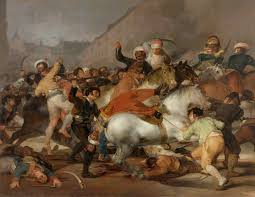 ** The painting is also known as The Shootings of May 3, The Executions, The Third of May, 1808: The Execution of the Defenders of Madrid.

***Guernica was exhibited in the Spanish Pavilion at the Paris International Exposition and in 1939 was sent to New York on tour for the benefit of the Spanish Refugee Committee.  When World War II broke out later that year, Picaso requested that it and a number of his other works be held at MoMA on extended loan.  When the war ended, most of the works were returned to Europe, but Picasso asked that Guernica and its preliminary studies be kept by MoMA until 'reestablishment of public liberties.'  It was returned to Spain in 1982 under heavy guard; there is ongoing agitation about where its permanent exhibition home should be.
Posted by Ciwt at 12:16 PM