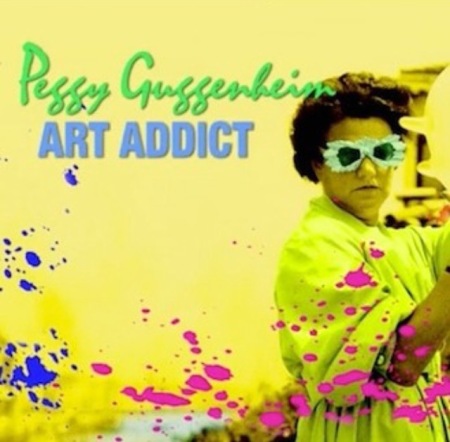 Ciwt didn't buy it: Peggy Guggenheim as "a kind of art collector who never existed before."  This was the central idea that launched and united the documentary Peggy Guggenheim: Art Addict.

Maybe Ciwt has seen too many collectors; virtually all of them become addicts.  Art collecting is addictive.  Also Ciwt can't help but think - just off the top - of the Medicis, the Popes/Catholic Church, Katherine the Great, probably the Pharaohs, the various Emperors of China, and a host of other patron-collectors that existed before and Far surpassed Ms. Guggenheim.

Also the movie supports a certain absence of morality.  For openers, Peggy Guggenheim's atrocious mothering, the constant affairs (This to Ciwt was Guggenheim's true addiction; she labeled herself a nymphomaniac).  The depersonalization, predatory (in her sister's case, murderous) behaviors by virtually everyone we meet in the movie go from there.  Ciwt isn't being a scold, but it seems as if the audience is expected to join the film maker in allowing awe of Guggenheim's alluring riches and high artiness to override common humanity.

You don't learn much in depth about Guggenheim or the myriad of early and mid-20th century artists and advisors who circled around her and she around them (including with most in a carnal sense).  But the movie is a  marvelous 'scrapbook' of these artists and a treasure trove of famous artistic talking heads along with a newly discovered audio of her last interviews.  On that level it is a must see for art lovers of the pre-war avante garde (Duchamp, Tanguy, Magritte, Man Ray, Mondrian, Picasso, the list goes on and on) and the New York School (Pollack, de Kooning, Motherwell, and many more), critics, gallery owners.  They are all there to be seen and heard but not especially understood.
Posted by Ciwt at 5:31 PM