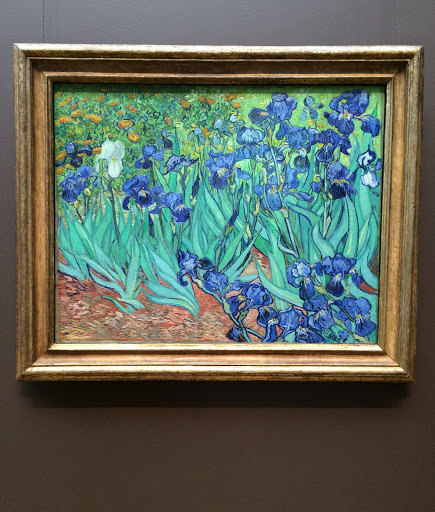 Los Angeles is a city of unexpected discoveries. One memorable one on Ciwt's recent L.A. museums trip was Vincent van Gogh's Irises at the Getty Center.  Like her surprise at finding The Woman in Gold  in the permanent collection of the Neue Galerie*, Ciwt may be one of the few who didn't know the Getty owned Irises so it was a particular delight to be standing just a foot or so from the actual painting.

'Owned' is an operable word surrounding Irises; many people associate the painting with $53.9 million, the most expensive artwork ever sold at auction.  The year was 1987, and two interesting things happened after that: 1. the Irises record stood for almost three years and 2. the 1987 buyer had insufficient funds so the auction house (Sotheby's New York) arranged a private sale to the Getty - which had been overbid in the original auction - for an undisclosed sum. But certainly not a minor sum, Ciwt can safely bet.

Too bad that many viewer's minds might be filled with economic thoughts because the painting is fresh, clear and a joy to view.  The colors are marvelously and appealingly pure with the blue based leaves and flowers rising with graceful energy

from a warm-toned bed of soil

Apparently - because there are no preliminary drawings - Irises is considered a study by art experts, not a fully realized, finished painting.  Just based on visuals, Ciwt would disagree.  Like Sunflowers*, each Iris is painted with its own individual character, and the painting is replete with complex, often lush and thick brushwork 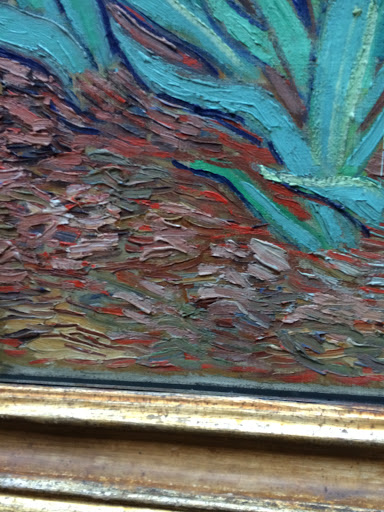 .  This plus the size and expense of the canvas and paints strikes Ciwt as the kind of work artists do on finished canvases.  Plus there is a joy in Irises that captures a moment in van Gogh's life when he had just arrived at the asylum and was feeling relief at sanctuary and optimistic that he would be saved from his encroaching insanity.

Study or finished work, Irises was a beautiful and uplifting L.A. surprise for Ciwt.

Here is the signage that accompanies the painting at the Getty: 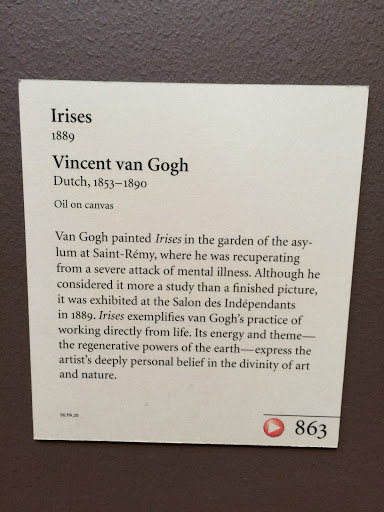